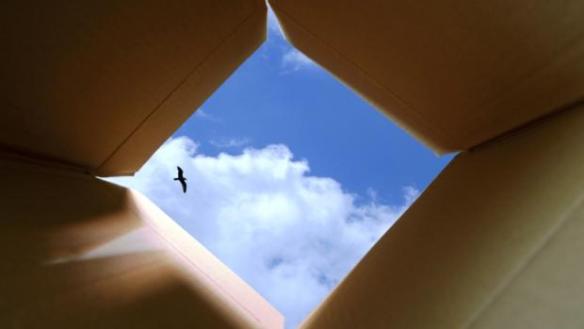 I’m an enthusiastic consumer of cheap book alerts from BookBub.com. One recent $1.99 Kindle book I am thoroughly enjoying is Every Patient Tells a Story, by Lisa Sanders MD. Sanders came to medicine by way of covering mostly medicine news, mostly for CBS (Kindle L274).  Chapter 2 opens with a description of “the doyenne of diagnostic dilemmas,” Dr. Faith Fitzgerald, working through a diagnosis in front of a packed conference audience of enthusiastic MDs. When Fitzgerald does not correctly diagnose the first case in a “stump the professor session” Sanders asks “Aren’t you disappointed that she got it wrong?” (L660, p. 26) the responses that come back are “No way. This is about the process..” and “I didn’t come for the answer, I came to see the thinking.”

Seeing the thinking is the best thing about Getting Things Done, for me. The anchors of GTD:

All take the raw materials of thought, and pre-process them in some way. Allowing pre-thoughts to be captured, tamed, pre-digested, and gradually fit together. 3×5 cards capture ideas in a way that makes ideas modular.  That is, easily connected and rearranged with other ideas. Rough organizing allows me to explore how ideas fit together, seeing both local and global optima, in a pre-argument form. So that by the time I am laying out arguments step by step, with a word processor, the “under brush” of local optima, have been cleared. No more throwing out a laboriously produced draft, because it “has gone out of focus,” no more writer’s block.

What tricks have you found, to help you “see the thinking” in your work? Share in comments please?

Evernote is great. = an anecdote. The plural of anecdote is “data” and purpose of this article is to analyze the data on my Evernote journey, out loud and share the impressions of value in use over time.

Member since May 2008 (119 calendar months), but did not start adding notes to Evernote until July 2009 when I listened to the passage of GETTING THINGS DONE covered in the previous post. So I’ve been an active user of Evernote for 105 months of the 119 months I’ve had an Evernote subscription. After my “Aha! I should use Evernote as my reference fling system!” I broke my 14 month string of zero captured notes. Here is a raw time series:

Here are the data by month. October to February is moving time (5 times in 10 years) where I scan like crazy to recycle paper and avoid moving atoms. Bits are lighter.

In earlier years, before Evernote went to a 10 GB upload limit per month, I could scan more documents than I could upload in a month. So for 2011 I was waiting until the end of the month, then uploading as many documents as I could. Evernote for a while then, allowed me to buy more uploading capacity, and I did that several times.

How to track how many notes you have by Month in Evernote. Expand this image:

Trick #1 is to set the Evernote client to “Snippet view” so that you see the monthly note totals, and Trick #2, is to type “created:YYYYMMDD” in the search dialog. Evernote will then show you all the notes since the date you entered. So to find all the notes since 20100101 (the example above) you type in created:20100101 and then look at the top of the notes list, for the count for the month. I regenerated the notes count from scratch for this post (long ago I could count by hand!) 10 years is 120 data points. Easy. Tried a new format of GTD inside Evernote. A single page that has the following sections:

I’m loving this format. When I catch myself worrying, I mind sweep the worry out of my head into the section above. When I feel a shift from writing down, I indent next actions underneath the projects, for example:

I just crossed 20,000 notes in Evernote, so I thought now might be a good time to update my occasional series on Evernote. Early in the life of RestartGTD I used to manually count up Evernote pages and track them.

Unfortunately my original note counting methodology was a hack that did not work accurately. Because Evernote has added monthly note counts, here is an example for my account as of December 25, 2016, look for the red arrows 1/3 of the way from the left, near the top of the page: 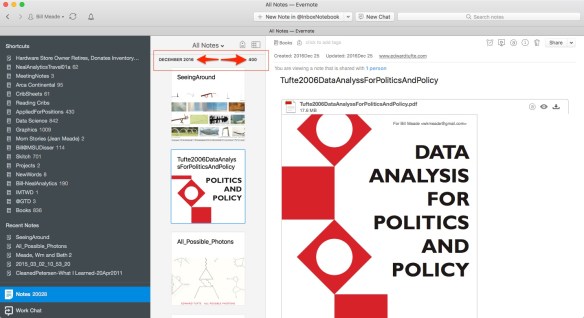 So, since I can use these Evernote generated non-hack counts, I decided to take a trip down memory lane and scrape out the monthly totals for the 102 months that I’ve been an evernote subscriber.

Here is the previous total and the more accurate Evernote-generated total note count for 102 months:

The count totals diverge in 2013 where SKITCH started defaulting to saving in Evernote. But I suspect that the convoluted “trick Evernote into counting notes” method that I was using, was in a word “bad”. Anyway, I trust the monthly total that Evernote now generate as it predicts the actual number of notes in my account within 2 notes. All comes back but 2 tablespoons! (notes)

So over the 102 months of Evernote, I’ve increased my usage of evernote month by month from 1 note per month on average, to almost 200 notes per month. Here is the same graph plotted with a rolling average notes per month plotted on a second Y axis in Excel 2016’s “hideous orange”: 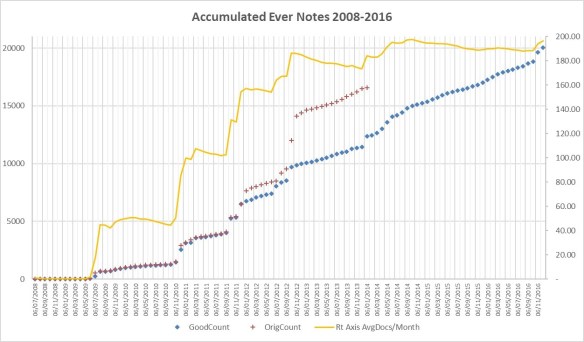 I continue to use Evernote as my GTD reference filing system … only. I’ve tried tracking projects in Evernote but prefer OneNote for detailed next action decomposition work. But as a reference filing system, Evernote has definitely achieved “roach motel” lock in of my information. The pattern in the orange average is very “ratchet” like. Jutting up, drifting down, but then jutting up again, and again.

Bits Are Better Than Atoms:

Just noticed a Fujitsu ScanSnap on Amazon (not sold by Amazon so Caveat Emptor) for $350 which is just about $100 less than normal price for an iX500. Arrival is already after Christmas, but for those of you taking off for India (not naming names Shobhit!) for a month, might be worth considering.

And, from Amazon, there is an Evernote edition of the Fujitsu ScanSnap for:

I heartily recommend the iX500 as can be seen by clicking here to read RestartGTD’s 40+ article ScanSnap library.

For those of you on the cusp of buying Evernote due to the 70+ RestartGTD article library, please consider clicking here to support RestartGTD (at not additional cost) as you sign up.

Best Regards for happy holidays and greener pastures for us all in 2017!!!

Before office picture with books

I read therefore i am leads to having too many books. About 5000 too many to be exact. So I consulted my engineering teacher friends and asked the best way to cut bindings off books to scan them to PDF. And the answer was a band saw.

This is the Ryobi 9″ US$130 band saw which I am using to saw-then-scan my book-library. 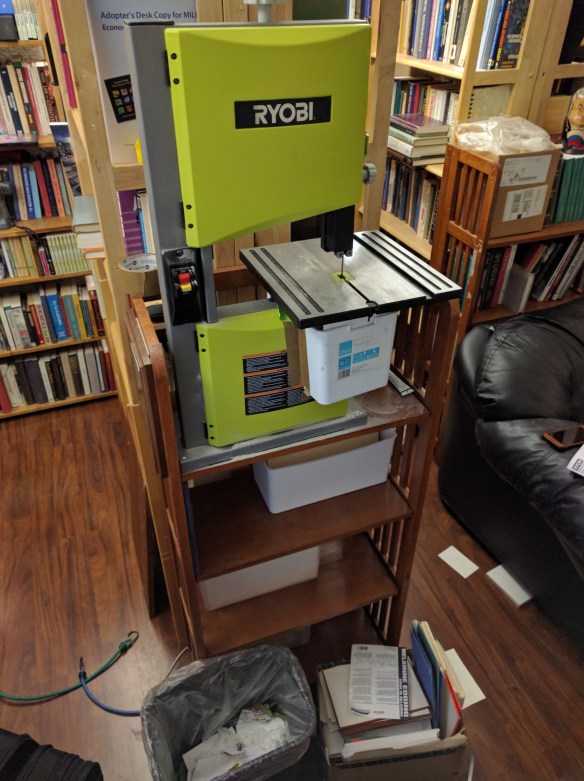 After office picture with PDF’d books:

With the books in PDF form, they all fit into the computer. So here is an update on my GTD Desk with my entire library in it. Purpose of this post is to share a *find* … of the 3×5 kind. I have started carrying an Oxford hand-note-card case. And, it is FANTASTIC!!!

I keep the case with 10 or so blank 3×5 cards (stored in the middle pouch so the cards do not get beat up) in my right front pocket. Even the pen holder is useful. I keep a skinny red pen in the case, so I can drag the case out and be ready to capture. Ideas, projects, action items, … whatever. There are also front and back slots to keep cards that have been written. So the case allows me to keep next actions with me, separate from blank cards.

Because my brain loves 3×5 cards. The most powerful organizing that I do is to lay out 3×5 cards on a giant table, and then re-organize them by sliding them into columns of related ideas.

When I put my entire trusted system into the MOST EXCELLENT OmniFocus, my brain refused to use the system. I could not bring myself to sit down at my desk. I *think* in Ready for Anything David Allen actually says “If you get too organized, your brain will refuse to use your system.” Certainly the case for me. So as I’ve documented in the evolution of my trusted system, I use 3×5 cards as my default “one idea, one piece of paper” capture system.

This post is the text of an email I wrote to a restartgtd.com reader who asked about Evernote.
/begin email
I’ve written a lot of posts on Evernote:
http://restartgtd.com/?s=evernote&submit=Search
The biggies with Evernote are:
Does this help? Ask again if not!
Bill Meade

A couple of email exchanges happened over the weekend and early this week.

The VP of legal eagles at David Allen’s company has given me her assurance that she’s good with the current state of RestartGTD.com … because I had/have permission.

*Aside* I managed the business side of patent litigation back in the day, when I worked at HP. We were burning 7 figures ,,, a month on six *big nasty* lawsuits, and I hope to never again live in litigation la la land.

So I was *philosophical* about whether to close RestartGTD.com. If the GTD powers that be did not want my enthusiasm (which is not for everyone), I was going to let RestartGTD.com go.

As it stands, RestartGTD.com will continue to operate as it has.

But, you could help if you would:

Thanks for the kind words and back channel emails! More posts soon! As soon as RestartGTD was in limbo I had a bunch of new ideas. :-(