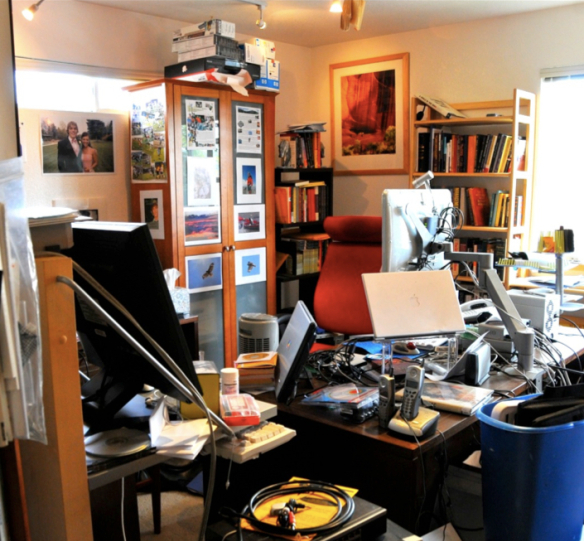 Evernote has a web page at https://evernote.com/webclipper/guide/#1 that shows you how Web Clipper works, and, what you can do with Web Clipper. I have not read Evernote’s entire web site, but it seems to me that Evernote is as meticulous about not mentioning GETTING THINGS DONE as David Allen is meticulous in avoiding mentioning electronic technology. The purpose of this post is to explore the roles Evernote Web Clipper can play in a GTD trusted system.

*Aside* David Allen is the master of the game of organizing. I yield to no one in admiration for the refined, focused, and effective system that Allen has made GTD.

… if I were David Allen, I would be pushing a two “gateway” technology tools to catalyze GTD implementation. For example:

What does this have to do with Evernote Web Clipper?

Glad you asked!!! Because Evernote Web Clipper is the principal means of moving important “bits stuff” from the world, into your Evernote database.

This image is an idealization of how the world should work to on-ramp stuff-with-next-actions (STNA) into an Evernote reference file system.

Q: What is Evernote Web Clipper?

A: The principal on-ramp to move bits from the world into your Evernote database.

A: Because when you have captured the bits your subconscious is diligently not-forgetting, and your sub conscious sees that it can trust your system. Your brain will go through the-mother-of-all-defrags and you will reclaim massive quantities of now-empty memory slots to renew your creativity and amplify focus power.

In this analogy, why is a scanner so important? Because a scanner is an on-ramp for all your paper into your Evernote Database. And, once the atoms have been turned to bits and brought into Evernote, you can recycle the atoms and gain two physical degree of freedom over your work environment: (1) Elimination of clutter, and (2) Rearrangement freedom as you can CraigsListFree your file cabinets and take back tons of office space. And, you reclaim memory slots increasing creativity and amplifying focus power.

What about Web Clipper on tablets and Smart Phones? It appears that Evernote has not gotten there yet. So Evernote gets a Janus (my little marker for stuff that isn’t in Evernote yet, but I find does make it in over time) as I predict this will happen.

I did find, however, Jonathan Mergy’s web site where he has a workaround to simulate Evernote Web Clipper for iPhones and iPads. I am an Android, so I have not tested this. But once you install Web Clipper and get accustomed to it, you instinctively reach to click on Web Clipper when you are using your phone or tablet.

Appendix A: Basic How Tos:

To see several of the things Web Clipper can do:

… and what is a NAS anyway?

I received the following question from a restartgtd reader who works in a small business:

Before I get to advice, I’d like to describe why this reader and I are talking about Synology’s NAS products and not some other brand.

I first *touched* a Synology NAS in September of 2009. At the time I was writing a review of Synology’s CS-406 (and their first) NAS product. NAS is an acronym that means “Networked Attached Storage.” What NASes do today, used to be addomplished by big expensive servers. For example, managing electronic mail used to be done with servers. Today, NASes manage email. FTP used to be managed by servers, today FTP is managed by NAS devices. CRM (Customer Relationship Management) used to be done on servers, today you can run CRM from a NAS.

In fact, it gets better. Not only can you use your NAS to run email, FTP, and CRM, you can run all three services, and more, simultaneously. Computers and disk drives are so fast now, server work is fast shifting to appliances like network attached storage. This is a big win for small business information technology!

At first I was impressed that the NAS did not crash. Then, I was impressed with how future looking the feature set was (downloading bit torrents handed off from a laptop in 2006!). And then, when the NAS had proved itself as a solid performer, I began to attempt to trick the NAS into failure. I could not.

What the NAS felt like was firmware that was so strong that anyone could jump on it and not collapse it. It recalled to mind a story from a friend of mine. Her grandfather entered a design contest in West Virginia to build a bridge. When it was time to be interviewed about his design, he took a scale model of the bridge, set each end on a chair, and then stood on the model. And he won the contract.

Synology’s firmware, felt like the bridge between the chairs.

How could a 1.0 NAS be so solid? Well, it turns out there is a back story. Synology’s founders wanted to have the first software company in Taiwan. And to start their company, they landed a contract with a big Japanese company making enterprise disk arrays. And the software they picked to develop first, was enterprise RAID.

OK, I won’t torture you with the details of what RAID is. The point of brining up RAID is that it may be the hardest software problem to solve in enterprise software. Synology was crazy to start with enterprise RAID. But, that is where the DS-406 NAS came from. After tiring of enterprise hard drive companies, Synology designed its own hardware and moved its RAID software to their own NAS.

This story is why I begin this post with Synology. Synology started out with a lead in software quality and functionality, and it has pressed its advantage ever since. Simple, Synology in my opinion is the best possible network attached storage device on the market.

Back to the Advice … which Synology NAS should I buy?

No. As I said in my advice email, the slowest NAS these days is easily fast enough to service a small company. In fact, I think that Synology is hurting itself in a way, because they allow customers to buy more expensive equipment than is required.

Think about it. You buy a $200 NAS (bottom of Synology’s line) and you love it. Great story. But I think that so many NAS buyers are first time purchasers, that having too big a product line, has the unintended consequence of keeping a lot of potential customers on the pre-purchase fence. Choice has been shown to be de-motivating (PDF).

“I’ll just wait for the next product update by Synology.” or “I’ll wait until I have the incremental $150 to buy the black model instead of the tan model.” NASes are new, and it is hard to buy a new product category for the first time. Excuses easily satisfy fearful buyers who make them.

In closing, I would point potential NAS purchasers to this FANTASTIC product review of Synology’s DS213j. Have no fear.

I found a post by Michael Waxman via Hacker News (my #1 source) this morning. I started this post with the idea that I would just write a couple sentences and then post the link to Michael’s article. But before I did that, I started reading carefully and there are so many moving parts, I had to build my own (Waxman + infogram =) Waxfogram to boil the email methodology down to something understandable.

When I taught MBAs and engineers in St. Louis, I had one off-the-scale-genius who introduced me to ray tracing. And as I studied Michael’s post, then looked at the programs and tricks he is employing, I began thinking of incoming messages as rays.

This then led me to think of Waxman’s tools in three categories: before-inbox, within-inbox, and without-an-inbox. This table breaks down all the tools Waxman discusses into these categories:

None of what Michael Waxman did in his email contradicts GETTING THINGS DONE. David Allen repeatedly talks about controlling the information that you allow to come into your life and inbox. But, Waxman has creatively extended the idea of controlling input. Using Unroll.me and Sanebox (and even arguably outbound only email, since not seeing your inbox prevents unwanted distraction from incoming email) are all input control tools.

I’ve always ass-u-me-ed GTD as something I do after “stuff” arrives in my inbox. But Michael Waxman’s system and explanation caused me to question this and reminded me to be more creative.