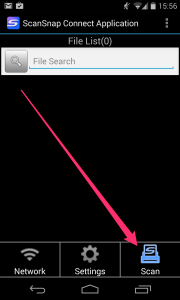 This article will show Macintosh users how to set up their ScanSnap iX500s to scan directly to their cell phones.

I’ve learned the differences between wants and needs many times with computer technology:

You get the idea. About the time Lotus 123 Version 2.0 came out with regression analysis built in, I began to get with the program and look at new features as discovery opportunities rather than as opportunities to demonstrate my instinct to fixate on the fossilized residue of what I already know.  I still relapse frequently, only adding a facebook account in order to access the facebook accounts of my children. But in the main, I “get” that change is the dance in the dealing with computers.

What are the use cases for putting information on your phone? Does anyone DO THAT?

Rule of three: There must be at least three compelling reasons for using ScanToPhone, for Fujitsu to create the capability. I don’t count “Because it is cool!” which no doubt was used on the ScanSnap product manager by the firmware programmers.

Next post, Use your ScanSnap iX500 to scan to phone: Part 2 How?

Support RestartGTD by buying at Amazon with this link!