The converted Ikea Conference Table GTD desk has been looking ragged, ever since I plugged the pre-cut trap door cut-out. I’ve been meaning to recover the desk for years, but three moves in three years = no veneer. Instead of veneer, I decided two weeks ago, I was sick of being in a GTD slump. So I went to Home Depot and found an inexpensive peel and stick solution. Bricolage, does not look cheap, but was = $30. What I found was 1′ x 2′ sheets of flooring, peel and stick flooring. And in an afternoon I re-covered the Ikea table with industrial stone. I cut 3/4″ x 12″ pieces of flooring to edge band the desk, and nailed the strips on with finishing nails to insure adhesion. The floor tile has added about 50 pounds of weight to the desk, and made it more stable. A surprise.

The flooring is enough tougher than wood, that I do not have to flinch when I put a heavy object on the desk. I liked the look so well that I bought a second box of tiles and have been resurfaced my side unit.

The top of the side unit actually looked more like the moon surface, with drywall screw craters where the previous configuration of organizers were anchored. 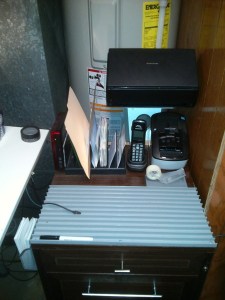 The stand at top left is an inverted iMac stand, with the flooring trimmed around the footprint. This will be a table for my label printer in the current evolution of the perfect GTD desk.