This appendix is an *aside* that I meandered along while writing section “6. Organize in Layers” in this morning’s post.

I went on this journey because “Where should I start?” and “How should I organize?” are the most frequent questions about GTD. And ever since starting GTD, when people ask I vapor lock. Of course I tell everyone to go to the basics:

After this advice, my friends say “Yes, I see that, but that is just too much … where should I start?”  So I vapor lock because I feel like the steward of the productivity door which I can’t open for someone else.

I can talk you up to the door, tell you which key will fit the lock and how turning the key will open the door, and that once you are through the door, you will feel SO MUCH LESS STRESS and you will be more productive.  I can give you names of people I have helped apply GTD to become the most productive people in their organizations.  But, these are just words.

Becoming GTD productive comes from pig-headed relentlessness change implemented for one week.  Doubts before and during the boot up of GTD just lead to excuses after GTD fails.

I think of Allen’s method (chapters 4 through the rest of GTD) as the “whole-hog-cut-over” to GTD.  I’ve not seen anyone succeed with whole hog, and I tried it and had to drop back to organizing in layers. In the 3.5 years I’ve been doing GTD, I have evolved a “shortest path” startup for GTD based on my observations of MBA student success and failure in inculcating GTD into their lives.  I think the shortest path is to:

Evernote-paperless-real desk is an organizational retro-virus.  If you can make it to this point, it is not if you will implement GTD, it becomes … when.

But I can’t afford to switch to GTD …

David Allen’s prescriptions are too extreme for more than about 1 in 5 people attending his seminars to implement.  And, I’ve observed that my “shortest path” retro-virus prescription is also too extreme. I think this is because fear of change makes people focus on costs.  And, costs are an *instant* reason not to think, change, or explore.  However, costs do not win the race, productivity wins the race.

So, let me swim up this impossible productivity waterfall a bit, by exploring the costs and value of the “shortest path” GTD startup.  I assume that an hour is always worth $75 to someone considering getting into GTD.  And, that the prospective customer is starting with near-zero organization as I did in 2009.  If your time is billed out higher or lower, you can adjust the spreadsheet (link) accordingly.

So, break even productivity increase of $1283/75=30.44 hours saved. And these 30.44 hours will be saved by week 10 after starting GTD.  In fact, assuming that GTD yields just 8 additional hours per week of work lead to a first year return of 1248.36% (by my back of envelope non-discounted, rough estimation - download worksheet here). 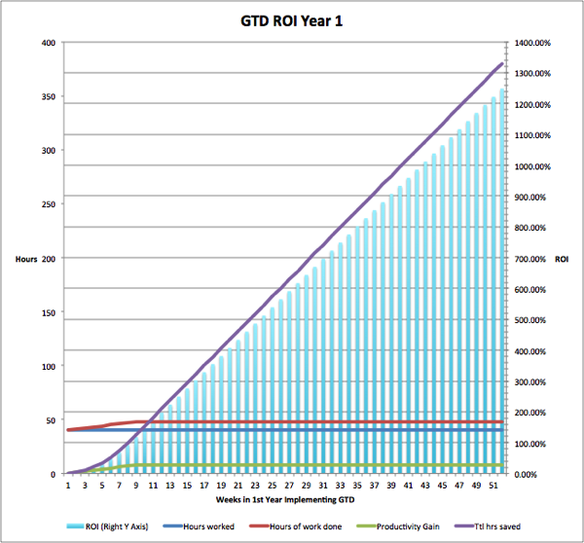 How many times during your career can you get into a 1,248%% return for $2,383?  Who rationally can afford to pass on the opportunity to capture $28,500 more value WITHOUT WORKING LONGER OR HARDER?

What are the objections?

1 Is the ScanSnap essential?

In short yes.  Office scanners and copiers can scan paper into Evernote, but ScanSnaps lower transactions costs of dealing with paper.  Transactions costs?  Yes.  Why?  Because we may think:

But … oops, that is not a next action.  There are several steps, scanning at a remote scanner is mentally expensive.  The individual actions are: (121 seconds)

Now the entire transaction takes 1 second longer than 2 minutes, so it just *barely* graduates in complexity to a GTD project by evading the GTD 2 minute rule.

But the problem with office scanners are more fundamental than the 2 minute rule. Brains calculate costs in terms of complexity, the more steps, the more cost.  The more cost, the more delay.  The more delay, the more likely you are to lapse into disorganization.  So when you have to use an office copier, you will let your scanning pile up, then when you have a big batch of documents to scan into projects, you will go to the copier and have to mentally reconstruct what project each document is going to.  Because this is a big pain, you won’t do your scanning.

When you have the ScanSnap at your desk, you cut the transactions costs.  For example the one page “scan project” is now: (21 seconds)

And believe it or not, scanning promptly even with a ScanSnap at your desk takes intestinal fortitude. Just a lot less than dealing with a remote office scanner.

2. Is the paid Evernote essential?

Again, yes.  Because Evernote Pro users get these additional benefits:

3. Forcing me to go paperless is too disruptive. Ok, here you are needing organization, … and you are looking at a 4,000% return on getting better organized.  The faster you get yourself organized, the faster and higher your return.  In this context “Paperless organization being too disruptive” is approximately the same as saying “I choose not to accept a 4,000% ROI, because I don’t want to change.”

The addition of 8 hours of additional productivity per week from implementing GTD produces and additional $28,500 return in the first year.  Against this additional $28,500 which is gained without longer hours and with less stress and pressure, the $425 to do your scanner right is rounding error.  The one week of forcing yourself to think in new ways, is nothing.  The nastiness of dealing with an office over flowing with paper, is the ante to make more by doing less.

I think that people very experienced with GTD tend to be annoyed with prospective GTD people who are deliberate in deciding whether to take the GTD plunge.  I can feel that way and I’m only 3.5 years in.  David Allen must be internally blowing a gasket when people can not move forward without perfect understanding and perfect planning.

To keep the spreadsheet simple, I did not incorporate these dynamics.  Including them would dramatically increase the return on investment.

I hope that I’ve talked you up to the door, showed you which key will fit the lock and how turning the key will open the door (shortest path), and given you a feeling for how once you are through the door, you will feel SO MUCH LESS STRESS and you will be more productive.  But, these are just words.