On the wagon: a great place to start

A general resource for anyone doing GETTING THINGS DONE is Merlin Mann’s 43folders.com.  But, for people trying to get back on the wagon, I think Mann’s first year retrospective is a great primer.  It is broken into three parts: (1) The Good Stuff, (2) The Stuff I Wish I were Better At, (3) Future of GTD.  In Part 2, Mann says:

One thing I’ve loved about GTD is how forgiving it can be once you have your basic system in place. It’s relatively easy to get back on track anytime you realize you’re starting to veer off course.

Merlin Mann The Stuff I Wish I were Better At

Preliminaries (skip if you’ve seen these graphics before)

My experience with getting back on the GTD wagon is the same as Mann’s: GTD is forgiving because the system is already in place.  In particular, the general reference filing system (Evernote for me), and some system for tracking next actions (OmniFocus).  Here is my current GTD implementation: For the first three years of doing GTD, when I fell off the wagon, it was triggered by crisis.  Unfortunately, because my brain did not yet fully trust my system, to get back on the wagon I found that I needed to improve my organization.

Here is the GTD implementation life cycle process I went through for the first three years: 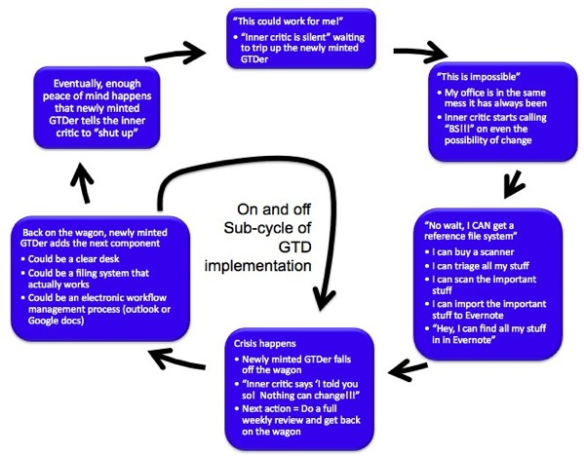 With my first try at GTD, my brain trusted my system maybe 50%, and I got my desk clear.  With my second GTD try, my brain trust of system went up to maybe 60%, and I got my filing system so that it really worked.  With my third try, my brain trust of system went to 70%, and I got next actions electronically tracked so that they were *just* *enough* automated (too much automation was a turn off for me).  Next, at maybe 80% trust, my office was transformed (“When I organize, I feel His pleasure!“).  The we moved to Portland, then I lived with an “undead GTD” system where my brain trust went from 80% in January of 2011 to maybe 60% by December 2011.  How does your brain’s trust go from 80% to 60%?  One overwhelming day at a time.  It was an ugly year.

In the last week of December 2011 I started to get back on the wagon.  My brain’s trust of my GTD system was at 60% when I started, and in the three break weeks I’ve spent working on my office and getting organized, my brain’s trust is back up to maybe 85%.  What took me from 60% to 85% was doing mind sweeps, getting current on all archival data being stored in Evernote, and rebuilding my paper folder organization.  All this in a context where I did not use todo lists, push, or try to force anything.  I got back on the wagon by letting the ideas come, not making them come.

I don’t think my GTD off/on wagon experience is atypical.  The good news is that when you come back to your GTD system, it is still there. And if, like me, you continue to refactor, refine, retry, then GTD becomes a ratchet.  You gradually get better.  You can feel your progress, you can feel your subconscious selves observing success and getting on board.  You can feel your brain’s trust of your system going up.

*Note* David Allen is leery of technologies, he’s concerned with the logical processes of GTD, not the technically instantiated processes. But, I’m not above loving technology just because it is helping me today. I may switch away from Evernote, but for now, general reference filing is Evernote’s game to loose in my GTD system.

Loose, because I think Evernote is a H-U-G-E deal for GTDers. Evernote provides weak and strong forms of gravity to keep us in the GTD orbit. In the weak form of attraction, being able to clip internet resources keeps one using Evernote every day, growing the gravity of Evernote in the information solar system. The gravity is the strong form of GTD attraction. Once you have the “Aha!” that you can find everything you need, rapidly, via Evernote, you are changed.

a. What to put in Evernote?

In the beginning, I would put documents in Evernote if the answer to “Will this ever have a next action?” was yes or maybe.  In the four years I’ve been using Evernote (I say four years because I just had to pay for my fourth year!), the quality bar on what I scan, has gradually gone down.  Today, if something “might be useful” it goes into Evernote.  For example, while in grad school in 1989 I wrote thousands of 4″x6″ cards.  Thoughts on articles, passages of articles, doodlings, I wrote it all down and reviewed the cards before my Ph.D. prelims.  These cards have emotional resonance.  Too much to throw away.  But, scanning 1,000 of them into Evernote in 20 minutes, gave me the release I needed to recycle the paper.  Now my heirs won’t have to dump paper.  They’ll just dump my Evernote account!  Once it is in Evernote, life is a bit!  :-)

b. How to find it in Evernote?

There are three tools to find things in evernote: search, notebooks, and tags.  Search is 90% of my use of Evernote, with notebooks being 15% and tagging only 5%.  Note, I’ve got 320 tags and less than 100 notebooks.  Tags are a crutch to prompt recall, I’m finding.  I forget what is in Evernote so I find myself occasionally looking through tags an exploring what is there. 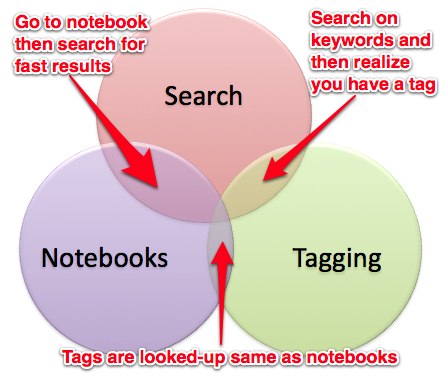 Evernote has recently added “Stacks” which are groups of folders.  Why Evernote is avoiding tree structure directories or some even better M-to-N way to organize files escapes me.  Stacks look and feel like a compromise solution.  I’ve got two stack groups, but their only benefit is to reduce the number of notebooks that can be seen.  They add nothing to searching, tagging, or for that matter, organizing notebooks.  For example, I found that searching ignores stacks, so to know what notebook something came from, the notebook still has to have the stack name appended to the notebook name.

c. What is your history with Evernote? d. How did you get all that crap into Evernote?

Note: As a Mac user I love my Fujitsu ScanSnap S1500M (PC version), I first owned a Fujitsu ScanSnap S300M but it just was not well suited to getting started with getting things done.  The models lower in number than the 1500 haver 12 page paper feeds.  The 50 page paper feed on the 1500 is much better suited to getting through a bow wave of paper in setting up your GTD filing system in Evernote.  Buy the best, only cry once!

But, to get your documents into Evernote, you are not limited to buying a desk top scanner.  You can use scan-to-file, scan-to-email, or scan-to-desktop on your office copier.  Most modern devices have this capability.  Evernote accounts come with email addresses you can use to send material.  To see what your Evernote email account is log in to Evernote: 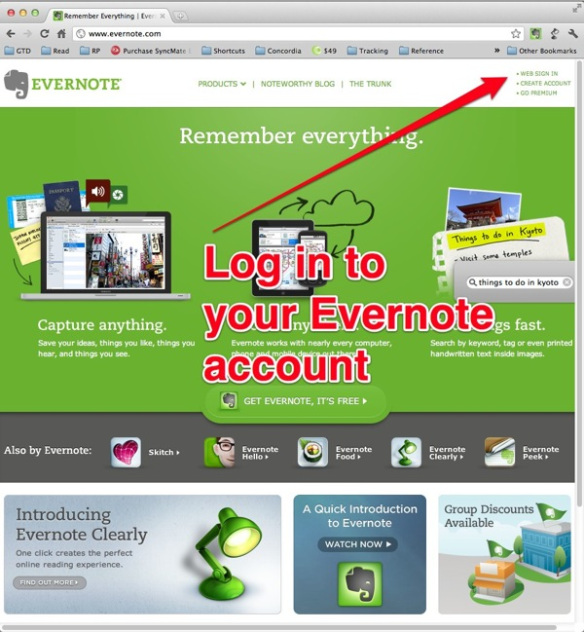 Then go to settings: Then scroll down and look at the email in the lower left-hand corner.  You can even reset this address if you find that you are getting spam sent to your Evernote account. In the old days (one year ago) if you scanned a bunch of documents and wanted to upload more than your monthly Evernote quota, This is the answer you got from John McGeachieVP Group Accounts Evernote (source email to Bill Meade from 12/1/2010):

This year, however, you can buy as many gigabytes of upload as you need for $5 each.  While last year I had to feed PDFs into Evernote 20 by 20 at the end of every month in order to avoid disabling my Evernote account, this year, we can upload to our heart’s content and then buy more space if we need it.  The link to buy more upload space is hidden in plain sight.  Step 1: Log in to your Evernote account on the web, Step 2: Believe that “Increase upload allowance” is on the task bar of your browser Window, Step 3: Click on the button and follow instructions.  You can read more about this feature here.

e. What is your Evernote advice for people who got on the bucking bronco of GTD and got violently thrown off

I think the reason is, that our brains give us permission to do ONE NEW THING well at a time.  When you read GTD, you learn that you need to do several things well:

And on top of this we get distracted with ancillary goals like eliminating clutter and implementing new scanners.  The fact is, one thing is a lot to change and have the change work.  Most people  are not going to change five things at once and have all five stick.

This comes back to Evernote and getting back on to the GTD wagon because I think that getting Evernote really working well, is the one most powerful change most people can make, in order to keep themselves benefitting from GTD over a long period of time.  The more stuff you have in Evernote, the more your brain will trust your system.

f. How do I get Evernote working smoothly?

The second step is to look at barriers between information and Evernote.  If most of the information you need to move into Evernote is electronic, then you need to streamline your data flow.  For example, I have a lot of PDFs that I move into Evernote.  I could email them, except that they are often too large to email.  So, I’ve gotten into the habit of opening Evernote on the left hand side of my screen, and my PDF folders on the right hand side of the screen and then dragging and dropping PDF files directly on notebooks.

Another method to move small electronic documents to Evernote, is to forward the document via email.  This is perfect for small eMail messages that you suspect will generate or support next actions in the future.

Wherever your reference information is, focus on the barrier between where the information is now, and Evernote notebooks.  Whatever it takes to move that information sideways, that is what you need to focus on to get Evernote working smoothly.  The process that I see work for my students is as follows:

Once you pre-sort your documents, you’ll have more space in your office, and the wisdom of buying the cheaper Fujitsu Scanner will be highly suspect as you look at 3 or 4 banker’s boxes, and 3x the time to scan your documents because you saved $150.  *Again* I bought the cheap one first, then the expensive one.  The expensive (S1500) one is more than worth the difference!  Buy the best, only cry once!

Space is hope, especially when after you have the paper in Evernote, you will have access to your memories bound up in that paper, for the first time since you filed the paper.  At least that is how it worked for me.

Hope this helps Dave, thanks for asking for the Evernote guide!