I saw this great article on bulbous bowed ships a month or so ago. The key illustration in the article is of the natural bow wave of displacement hulls (green below), the bow wave of the submerged bulbous bow (blue line) and the resultant combined wave (red line).

Bulbous bows reduce the drag on ships. The energy savings can be huge, like 500%. Since reading the article, I haven’t been able to stop reflecting on how GTD reduces drag … like a bulbous bow. Wait, stay with me now! And, I’ve been exploring analogies between how GTD works and how bulbous bows work. In this post, I’m going to explore how the analogy fits, and use the analogy to articulate some of the visceral sensations I’ve experienced in (re)starting GTD.

This analogy allows me to articulate some of the visceral sensations I experience when re/starting GTD. And, it was a stepping-stone for me to quantify component costs of organizing that I experience.

In the beginning I was disorganized. For example, my wife said “I have to have a door that I can close on Bill’s office, then, ‘it’ is OK.” This starting point is represented with the green line on Figure 1. As I implemented GTD I had a sense that the hills I was climbing, were flattening out (shift from green to blue in Figure 1). The bow wave became less steep. Work began to flow without drama, I was able to stop using todo lists. Crises slowed down, and then, for the most part, stopped. I developed a “situation awareness” of all my projects that allowed me to prioritize my time dynamically, and cut down dramatically on stress and energy drain from work.

Now the quantification part.  To try and put an equation around my experience, I set up costs of organization as follows: 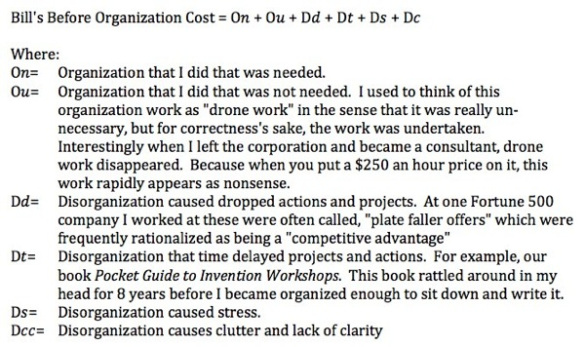 Just for the sake of illustration, I’ll subjectively make up scores for these costs before I got on the GTD wagon. Assuming there are 2,000 working hours in the year, I would apportion the hours in each category as: I admit this is an anecdotal comparison.  But let’s not forget the point, I’m trying to get a handle on how to articulate how GTD has freed up time and mental strain.

Back to visceral sensations:

My dominant visceral sensation from shifting to GTD was a sense of relief. Let’s compare before and after and see why:

Table 4 displays each of these elements with my subjective sense of what happened.

OK, so this comparison before and after GTD compares the green with the blue line. Before has lots of drag, after has a ton less drag, huge savings in time and energy and clarity. Actually, one of the hardest things to describe well about GTD, is the feeling you get as you calmly work through next actions and projects, and realize that you are catching up.

How long has it been since you had the hope of being caught up? I’ve spent my adult life behind. But as you implant GTD and find the right mix of digital/paper/people/reading to keep you humming, you begin to have a glimmer of hope that you can get everything done. Viscerally what this feels like to me, is being under water, like 10 meters under water, and being short of breath.  You are down and you know you need to go up, you force yourself to be calm as you swim as fast as you can. At some point, you realize that you are going to make it to the surface before your air runs out. That point of realization, is what going from the green bow wave to the blue bow wave *feels* like.  As you implement GTD, you start down wave from the green line.  You begin to see light.

In my first cut at implementing GTD, this release sensation, and the feeling of being on top of my work for the first time in my adult life, was very powerful.  Almost intoxicating.  My wife said “Why are you so happy?” after the first week of GTD.  As I fall off the GTD wagon, and then get back on, the seeing light sensation is not as great.  But, it is still there.  After getting back on the wagon over December 2011, I’ve had a month of clear mind.

Even though I have a clear mind, I find that I am confronting many bad habits picked up in decades spent being behind.  For example, I find that when I think about prepping a class meeting for my quant methods undergrads, I automatically and instinctively panic, start feeling guilty for not having the prep done already (even though I haven’t had time to do it, guilt is free once it become part of habit).  So panic, fear, and guilt are there for many tasks I have to do.  But what I’m finding is that so is a quiet side of my mind.  A calm, confident side of my mind.  This calm/quiet/confident part of me over this past month, has taken the tasks away from my habitual panic, guilt, and fear side.  I find myself saying “Why am I feeling guilty about this, I have a ton of time to get this done.  Oh, and another idea I can put in that class…”

Seeing the light, having the hope of catching up, allows me to SPEND my time before the task, much more productively.  Instead of worrying, I’ve dropped the worry, I’ve shifted to reflection.  As I reflect on the class I need to teach, I find that I am able to use the information on where the minds of the students are, and develop smaller, more focused Excel exercises.  I am much more in touch with the students when I’m not self-criticizing about not being omniscient.

What About The Red Line?

Here’s a refresher on Figure 1:

I think the red line is a metaphor for what happens when ahem …, “a certain person” falls off the GTD wagon. Immediately, I ooops, … “they” become less efficient, “they” have a visceral sense of the bow wave of daily work, becoming steeper. This kicks off panic. Panic decreases clarity and increases self-criticism. In the face of chaos and criticism, interruptions become drop everything crises.

Speaking of crises, how does one’s boss know to walk in during panic chaos and self-criticism moments? “Whoops” the person has another “suppository project.” Drop EVERYTHING NOW!

When you implement GTD, you have many visceral responses. Because GTD works on both subconscious and conscious levels, these visceral sensations are important signals. Signals that you are making progress. Signals that you may be back sliding. When you get into GTD work flow, you have a sense of stress relief, a sense of time slowing down, a sense of clarity of mind, these are good. All nourishing to, … mind-like-water.

However, I find that some people I help implement GTD, respond to these positive visceral sensations, with a lot of self criticism. Self criticism as you implement GTD drives you from the blue or red curve, back to the green curve. Exhausting. That is what falling off the GTD wagon fells like.

I hear questions like “I thrive on chaos. What will I do if I don’t have chaos in my life to thrive on?” These can really drag over-thinkers to the green bow wave in a hurry. Remember, if you can’t get everything done, the most likely cause is that you are not organized enough. When you get organized enough, you surf down from the green bow wave, to red, and if you buckle down, to the blue. You can feel it. You will feel it, just focus, breathe, and organize. When you panic, organize more, and then get back on the wagon.